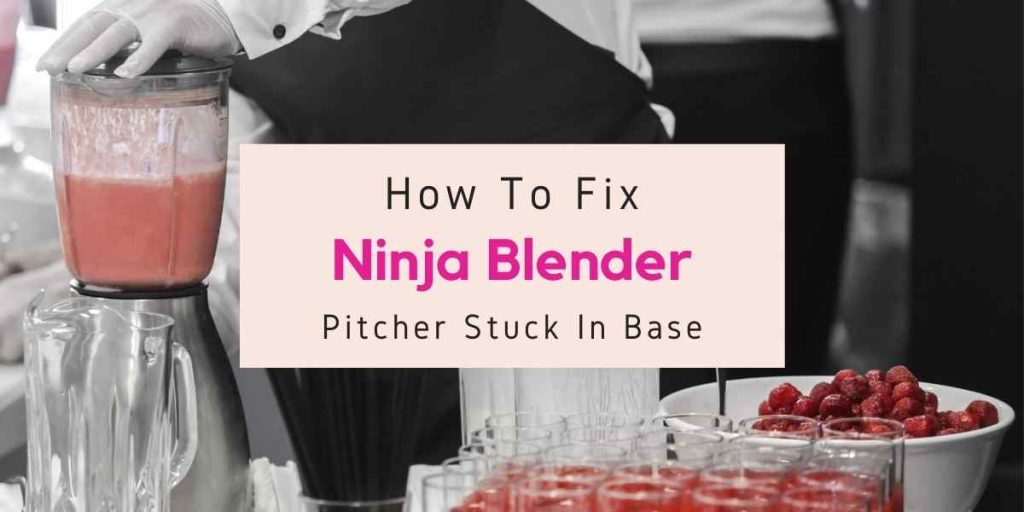 Ninja Blender Pitchers are a great way to make smoothies, soups, and sauces.

Unfortunately, the pitcher can sometimes get stuck in the base when you’re trying to remove it.

This isn’t only frustrating, but it can also be dangerous if you don’t know how to get the pitcher unstuck.

Fortunately, there are a number of things that you can do to free your pitcher up.  You just have to know what options are available.

in this article, let’s look at 11 common solutions to freeing your stuck Ninja blender pitcher as well as other steps you can take.

Why Is My Ninja Blender Pitcher Stuck In Base?

The most common reason that this can occur is that the pitcher has become lodged in a way where it won’t release properly.

This might happen if you are trying to remove it while it’s still running, or when the base is already wet.

Other common problems that affect pitcher removal are incorrect assembly, damage to the pitcher or base (which can occur through regular use), and power failure.

Solutions for Removing Ninja Blender Pitcher Stuck In Base

When your Ninja Blender Pitcher becomes stuck in place, there are a couple of different things that you can do to get the pitcher unstuck.

Follow these 11 simple solutions for freeing up your blender’s pitcher when it gets stuck in its base:

1. Unplug The Unit And Then Try Tapping On It

Before attempting to use any of these methods, make sure to always unplug your unit first.

Even if your blender has a non-contact automatic shut-off feature, it’s better to be safe than sorry.

2. Turn The Power Switch Off If Your Blender Has One

This is another way of turning the unit off, and can also help with freeing the pitcher from its base if used in conjunction with some of these methods.

3. Try A Spoon Or Other Flat Tool To Pry Up On The Pitcher Handle

You might need to try this several times before you actually get the handle-free, but pressing on one side of the pitcher while lifting up on the other can sometimes release it enough for you to pull it right out without resorting to any additional steps.

4. Hold The Base With One Hand And Apply Pressure To The Base Of The Pitcher

Place your free hand on the bottom of the base and press down while firmly grasping the handle with your other hand and pulling up on the pitcher.

This will likely take a few tries but should work in most cases when you do it correctly.

5. Wiggle The Pitcher Back And Forth While Pulling Up On It

The final step to freeing up your blender’s pitcher is typically either wiggling or twisting its handle back-and-forth as you pull it out of the base.

While it may take some practice to actually get this right, it works surprisingly often for releasing stuck blenders by shifting their contents in a way that allows the pitcher to slide out of its base.

6. You May Need To Pry Up On The Base Of The Pitcher

While it may seem counterintuitive, sometimes you need to press on the base of your blender’s pitcher rather than pry up on the handle.

This method is most effective when you have already tried pressing on the outside of the pitcher and tapping it down onto its base.

7. Check For Damage To Your Pitcher Or Blender

This includes making sure that there are no breaks or cracks in the plastic of the unit itself, which can sometimes occur not only from use but from dropping or other kinds of trauma.

It is also important to make sure that there is nothing wrong with your blender before attempting any repairs yourself, otherwise, you could make the problem worse.

8. Run The Blender Under Hot Water To Release Stuck Contents

If you are accidentally trying to remove your pitcher while it is still running, simply run some hot water into the base of the blender and let it sit for a few minutes.

Once the hot water has been running for a while, it can often soften up any contents that might be stuck inside of your blender’s pitcher enough to allow it to release properly.

9. Put Some Dish Soap On The Inside Of Your Blender

This can help to create a bit of suction that might make the pitcher easier to release from the base if you cannot get it out using one of the aforementioned solutions.

Adding a few drops of dish soap into your blender is also effective for helping its blades work more efficiently by reducing friction or ‘sticking’ between them and what they are blending.

10. Make Sure That You Are Properly Assembling Everything

The most common reason for pitchers failing to release from their bases is because they were not assembled properly during the first place.

Check to make sure that everything lines up and fits together correctly as described in your user manual before resorting to any other steps.

This is the last resort, but Ninja customer service should be able to help you free your pitcher from its base as long as you are still under warranty or have a valid receipt for your unit.

Why Is My Ninja Blender Single Serve Not Working?

Why Is My Ninja Blender Power Button Blinking?

How To Prevent A Blender Pitcher Stuck In Base

It is better to use your Ninja blender in a way that is safe.

If you do not, then the pitcher may get stuck in the base. It is best not to move the unit while it has an ingredient inside or when wet.

You should also make sure that you keep the base clean and unplug it before putting any parts of it into water. It’s important for all of the pieces to be connected before turning on your machine.

When you notice that your Ninja Blender Pitchers seem to be getting harder to remove, or if you’ve noticed damage to the unit itself from regular use, it’s always best to let a Ninja customer service representative assist you with finding a solution.

Of course, exercising common sense when using your blender can prevent these kinds of problems from ever occurring.

Ninja Blender Pitcher Stuck In Base – Wrap Up

After using one (or all) of these 11 methods for releasing your Ninja Blender Pitcher from its base, make sure to wipe up any food or liquid spills before turning your unit back on, as well as check for further damage or defects like cracks or leaks.

Ninja Blender Pitchers are an inexpensive and convenient way to make smoothies, soups, and sauces.

However, if you want to avoid the frustration of a pitcher that gets stuck in your base whenever you try to remove it, always be sure to follow the proper care instructions for your blender’s pitcher.